20 years of the Kalamazoo Blues Festival

This is the 20th year for the Kalamazoo Valley Blues Association event. The festival began because some local blues musicians wanted to make both music and money. The Kalamazoo Blues Festival starts on July 11 and runs through July 13 in downtown Kalamazoo.

Dave Hunt is a singer and harmonica player with the Kalamazoo band Seventh Son and one of the founders of the event.

“I will say this and it kind of flies in the face of the mythology, but the original reason was strictly mercenary on the part of local bands,” says Hunt.

In its best years, the festival has attracted 15-thousand attendees over the three days. Ralph Yingling is current president of the Kalamazoo Valley Blues Association. He says putting on the festival is a lot of work that is mostly done by volunteers. He adds that the festival helps to support work the KVBA does throughout the year.

“What many probably don’t realize is that this is our real fundraiser of the year, so we can offer our scholarship program and our Blues in the Schools program," Yingling says. "We put on blues history presentations free of charge…and that takes money.”

One of the bands that played at the festival’s first year is returning for the 20th, Lil Ed and the Blues Imperials.

“Kenny Neal has been a great success here in Kalamazoo over the years," says Yingling. "He’s played here, I think, five times. He’s coming back, people love him and he loves it here.”

Other headliners include Blues Caravan, Janiva Magness, and JP Soars and the Red Hots. Regional bands get their stage-time too, including the Marci Lynn Band, Bosco Gee and Marble Garden. Dave Hunt says Seventh Son has performed more times at the festival than any other Kalamazoo band, and while they are not on this year, he’s still glad the event has made it this far.

KVBA president Ralph Yingling says the organization uses the festival to both entertain and educate the audience.

“We’re trying to expose them to all the different types of blues that are out there. By having a diverse mix of styles of the blues, it’s sure to reach and touch a wider audience,” says Yingling.

There are several things that go into creating a successful blues festival in Kalamazoo Yingling says.

“We’re looking for the 35 to 65 year-old people that appreciate the blues. We’re also blessed with a great community that knows about music. They are artistically, musically inclined. That brings them out. Yes, the line-up is important. We need to have national acts.”

Yingling says the Kalamazoo Blues Festival has had many very successful years and a few that were not as successful, mostly due to weather-related issues. But when it’s going well, and the audience really responds to the music.

“It’s a beautiful thing and when you see it happen, it really sends chills up and down your spine,” says Yingling. 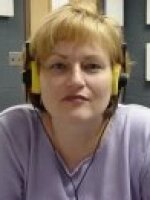