Sales of vinyl records make up a tiny fraction of the market compared to CDs and MP3s. Yet stores reported more than 6 million new and used vinyl records in 2013. That's a 20-year high for the format.

For sixteen years, Richard Bowser of Kalamazoo has done a weekly radio show called Sounds in Space on WIDR at Western Michigan University on which he plays all vinyl records.

“I love music and I love listening to it on records,” says Bowser.

He has around 3,000 vinyl record albums in his home collection.

“I’ve got the iPod. I’ve got all of that stuff," he says. "I’m not trying to preserve the past for its own sake. This is just something that has always stayed with me and it’s really fun.”

Bowser also does a monthly show called “Dance Party” at The Home Bar with his friend, who goes by the name of Bat Guano. It’s for his friend’s show on WIDR called SwaG! Bat Guano is also an aficionado of records and music.

There’s a big community of people who like records in Kalamazoo according to Bowser. Currently there are two record stores in Kalamazoo, Green Light Music and Video and The Corner Record Shop.

Sean Hartman, 24, is co-manager of The Corner Record Shop. He says his age group was the smallest segment of customers at the shop when it opened, but now young people are buying vinyl just as much as the other customers.

Customers range from high schoolers who might have gotten a record player for a birthday to college students buying new releases on vinyl. Some people are buying or fixing up an old player and getting out their old collection. Others in their seventies have never stopped listening to records.

“We get a lot of customers in here that just come in here and treat us almost like a museum,” Hartman says.

They tell him about having vinyl records as a kid and talk about going to see those musicians at concerts when they were young. Bowser says that records sound great on a good system. The down side is the size and weight of them.

“I have one good friend who has more records than me and he says, ‘I’m never moving again.”

Bowser has everything from Medieval Classical Music to Punk Rock, Jazz to World Music.

“If you like music, give it a try," he says. "I think a lot of people were quick to reject it. Come back and check it out. It’s really fun.” 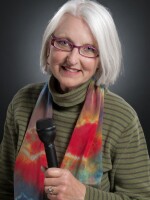 Nancy Camden
For thirty years, Nancy Camden traveled the country selling her fabric art at juried art fairs, finding NPR from a laminated state-by-state station guide as she drove. Now, her curiosity and adventuresome spirit guide her in creating sound-rich human-interest stories for our Arts & More show. She graduated from Ball State University with majors in Art and Theatre.
See stories by Nancy Camden