From The Farm: Winter Winds Can Be A Blessing Or Curse

The west shoreline of Lake Michigan is known as a windy location, because as air masses travel across the Lake’s open water, there are no structures or forests to create friction that would slow its movement. Yet, like the ancient symbols for theater showing smiling or weeping faces, wind can either work in a farmer’s favor or cause financial losses.

Two winters ago, icy winds roared off of Lake Michigan and burned the unprotected leaves on our friend’s rhododendron plants that were sticking above the snow cover. The wind also nipped blueberry canes and fruit buds so that they withered and died.

While the temperatures were frigid, the wind chill increased the damage on our farm and at our friend’s rhododendron nursery. Unlike the home gardener who can wrap their plants in order to shelter them, we and other farmers can only plant windbreaks and hope that the trees will protect our many acres of bushes.

When my husband, John, and I plant a new orchard, we take care to lean the saplings a bit to the west so that over the years the prevailing winds will nudge them into an upright position. Otherwise, one day, they will resemble abandoned, elderly orchards with their trees tilted to the east.

Usually our baby goats arrive in March - a blustery month - so we house them in a large, wooden kid box. Drafts could harm them even more than cold. During gales, our one-ton oxen leave the pasture and snuggle in their stalls, happy to be out of the wind. Even in my garden, a wild summer storm uproots corn stalks and blows over broccoli plants.

Yet in other ways, the lack of wind can also harm our crops. As a teen, on frosty nights, my husband, John used to help manage smudge pots—small chimney heaters that would warm the air slightly and keep it moving through an orchard. Because smudge spew forth pollutants, most farmers no longer use them. Many have installed overhead irrigation systems. When the temperatures drop, sensors turn on the sprinklers and water coats the buds with ice, holding them at 32 degrees.

Now because of water regulations, farmers are purchasing tall wind machines with long blades that stir up a current, drawing up the cold air and pushing down a warm draft so that the frost can't settle between the trees. Some of the windmills even have a propane heater that even warms the air.

In April 2012, nineteen nights of frost swept over southwestern Michigan orchards. So farmers turned on wind machines and sprinklers, hoping to limit their losses. Yet, near the last day of that April, a message from the Michigan State University extension office warned that the usual frost protections would not prevent damage. Due to an inversion, the upper layer of air was even colder than the lower one - and because there was no wind, the inversion would not reverse itself.

In the still dawn, blossoms and buds withered and died. Our farming friends lamented the tragedy. We reminded each other of better springs in the past and hoped that next year would bring more amiable weather.

I recall an early, warm June afternoon, when the prevailing westerly wind perfectly dried windrows of hay, those long spirals snaking across a field. I drove our tractor and baler to the alfalfa field, thankful for the wind that cooled us as John and Jason stacked the hay bales on the wagon. On that day, the wind was my friend, blowing away the memories of winter and spring frosts. 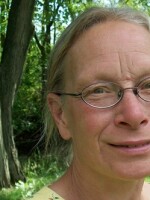 Joan Donaldson
Joan Donaldson’s latest novel, On Viney’s Mountain represented the State of Tennessee at the 2010 National Book Festival. The Christian Science Monitor and Mary Jane’s Farm have published her nonfiction. Her book about her family’s organic fruit farm, Wedded to the Land will be released in 2013.
See stories by Joan Donaldson
Related Content