Dede Adler and Josh Holcomb of Dede and the Dreamers join Craig Freeman in the studio to play original songs and talk about what's behind their hard-to-categorize music. Alder formed Dede and the Dreamers for a single occasion: to lull a crowd to sleep in the wee hours of a music festival. Two musician friends - John Driscoll and Chris Michels- accompanied her on drums and bass as she sang and played vibraphone. That was the beginning of the band, which classically-trained violist Josh Holcomb would join later, bringing voice, viola, improvisation, and an array of effects to the sound of the group.

Singing while accompanying oneself on marimba, which Dede Alder taught herself to do, is almost unheard-of in the world of singer-songwriters. Hear their unusual sound in this session, hosted by Craig Freeman, recorded in the Takeda studio at WMUK, with Martin Klemm engineering.

2017-05-26_Dede_Alder_Josh_Holcomb2.mp3
The full session with Dede Alder and Josh Holcomb of Dede and the Dreamers, interviewed by Craig Ferguson. 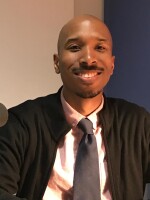