Jazz Currents: In The Studio With MOSS

MOSS is probably best described as a collaborative project rather than a band. It brings together five top contemporary vocalists to create, in a short space of time, song arrangements that draw from a wide palette of styles and techniques. Each of the five - Jo Lawry, Lauren Kinhan, Kate McGarry, Theo Bleckmann, and Peter Eldridge - have unique talents and directions: Kinhan and Eldridge are part of New York Voices, Jo Lawry collaborates with Sting, Theo Bleckmann makes use of electronics in his solo ECM albums, and Kate McGarry often draws on her folk music background. Their kinship is based on recognizing their shared strengths and unique differences.

In 2008, with original member/founder Luciana de Souza (Lawry is her replacement), the five singers made a now-classic album, Moss. Only in recent months have their professional lives allowed them to focus on a follow-up project. Western Michigan University, and Gold Company director Greg Jasperse, who arranged a WMU residency for the quintet, has played an important role in reuniting the singers and offering them the chance to work on new music.

In the studio at WMUK, they sing new works and favorite from their first album, with Jazz Currents host Keith Hall leading them through a musical conversation. 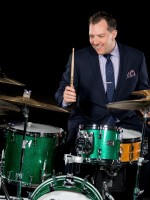